I haven’t been posting links to my comments at the end of my postings, but here are my comments thus far:

Feb. 8 2015: Commented on Jordon Bratt’s post, The Typical Type is Not Your Type

April 13 2015: Commented on Mason Farr’s post: Interactivity on the Web

Design thinking is actually a thing. I did a video on it earlier this year in my day job with Arlington TV. As far as I can tell, it is what we used to call blue-skying with one important difference. In design thinking, participants are asked to disregard the status quo and re-invent their project as if it had no prior history. In other words, “if we had to invent this from scratch, what would it look like?”

I’m not going that far with this design assignment, but I am incorporating lots more visual elements and re-thinking the overall look. I am fortunate in my area of historic research in that there is an abundance of visuals. Arguably, cinema and photography are the only art forms where there is a reasonably complete historical record of their origins. I don’t want to go overboard in my use of historic fonts (they’re almost all serif anyway), but I think I can have some fun giving the headings and subheads a historic feel. I googled phrases like “popular fonts by decade” and “historic fonts” and this seems to be the best source for fonts of the past (assuming you are in the Adobe Cloud world).

I had a breakthrough this week. Up to now, when I saved a cropped image, they inevitably appeared against a solid white background even though the Photoshop background was checkerboarded. The solution was forehead-slappingly simple. Instead of “Save as” I needed to “Save for Web” and check “Transparent Background”. I wanted an image of a kind of faux Greco-Roman “Goddess of Cinema” as my logo. This kind of representational art was popular in the pre-WWI era in the popular press and a little search of the Media History Digital Library yielded this:

Using my newfound selection, cropping and erasure skills, I ended up with this:

I’m still not sure how prominent a presence she will be, but I like her because she is representative of both history and cinema.

My favorite image is this, from a 1922 issue of American Cinematographer:

Other than including it in a gallery, I’m not sure how to best use it. The caption reads, “Give Us a Place to Stand and We Will Film the Universe.” What a great encapsulation of the power these people felt as they began to understand and master their new art.

Josh Brown and his colleagues at GMU’s Roy Rosenzweig Center for History and New Media wrote History and the Web as a concise overview of the institutions efforts to create a dynamic, innovative tool to teach history in the early days of the Internet. At a time of slow dial-up speeds on the web, the development of the CD-Rom offered the promise of relatively fast access to text and images. A short-lived CD-Rom industry arose, and GMU was in the vanguard with their best-selling series of educational discs, Who Built America?

As the Internet developed in the 21st Century, the RRCHNW team built an early interactive website, The Lost Museum. It was an attempt to create an educational tool using game design techniques, similar to those found in the early video game, Myst. Its premise was based on a real-life historical event, the burning of P.T. Barnum’s American Museum in New York City. The fire was presumed to be arson, and there was no shortage of suspects. The Lost Museum’s scenario urges players to wander through the museum, look at various exhibits, and collect clues as to the likely arsonist. The site still survives, and itself plays like a museum of early interactive web technique.

Brown concludes that while Who Built America? and The Lost Museum were successful in their times, the Internet has since evolved away from the model of a closed interactive experience (the four walls of Barnum’s museum) to one that encourages endless branching and exploring. Who Built America? and The Lost Museum were designed with a specific curriculum in mind. Today’s Internet, for better or worse, is more like a wide-ranging Exploratorium in which users are free to design their own curriculum, abandon it, and set off on new learning journeys at will. The Internet Archive offers no lesson plans.

Writing as someone whose lifelong learning style suggests symptoms of never formally diagnosed ADD, I instantly felt at home on the web because it closely mimicked my own chaotic patterns of experiencing the world. What does this portend for generations whose brain development and learning patterns have been formed by the web? Will future curriculums be less likely to take learners from points A to Z in favor of an experience that begins at Q with side trips to π and @? On that disconcerting thought I have nothing more to offer, other than to tremble at the contemplation of a world built by ADD-addled souls like myself.

Of course survey and giving your readers the option to annotate just extends your visitors’ interactive options. Not to mention the old-fashioned comment box.

Just throwing this message in a bottle to see if someone has a solution. Since my site is called “History Written in Lightning”, I had the idea of superimposing one or two lightning bolts on either side of the title. I didn’t want to use a cartoon bolt, so I went on the NOAA.gov site to grab a (royalty-free) hi-rez image of a real bolt. It was a fairly easy job eliminating the sky from the bolt, leaving only the bolt with a checkerboard background behind it. No matter what format I save it in, jpg, bmp, tiff, targa, the lightning bolt is saved against a white background. This obviously won’t work if I want to superimpose the bolt on my pale blue banner. Any ideas how I can keep my bolt but lose the white background? Here’s the original bolt and how it looks after I save it:

If I don’t hear back from anyone before tomorrow night’s class, I might pick your brain(s) in class. Thanks in advance.

I work for the Arlington County government, so I am familiar with the requirements of the Americans with Disabilities Act (ADA). For the most part, they impact my professional life in the form of closed-captioning for video programming. Since our channel also has a website, we must make both the visual elements and the videos embedded within accessible.

Joe Clark’s article, How Do Disabled People Use Computers? shows its age, but also serves as a primer on the types of disabilities and ways that existed in 2002 to provide increased web accessibility. When discussing people with hearing impairments Clark declares, “Adaptive technology? There really isn’t any.” This might have been true thirteen years ago, but a quick Google search brings up several sites, such as this one from WebAIM, which address new or emerging technologies to assist people with hearing impairments.

WebAIM’s blog entry on 10 Easy Accessibility Tips that Anyone Can Use was very helpful in providing the necessary HTML and CSS code to make our websites more accessible. In advance of Monday’s practicum, I am going to do what I can to add alternative text, basic landmarks and other ADA-friendly markups to my own website. The large PDF by Mark Pilgrim, Dive Into Accessibility, went into greater detail and offered much more complex markups (it was designed as a 30-day curriculum). For me the most engaging sections were his humorous, yet believable character studies of five diverse people with different disabilities. It was Pilgrim’s way of reminding us that there are real people who are the beneficiaries of the work we do in making our websites more accessible. It stood in sharp contrast to Joe Clark’s sometimes clumsy attempt at humor when reviewing the proper nomenclature of disability. Pilgrim is more interested in the human beings behind the labels.

Paul Bohman’s An Accessible Method of Hiding HTML Content was useful in that he demonstrated that there were occasions when adding web-accessible code on the HTML will have the unintended effect of altering the content for users without disabilities. His solution to this is to make the additions on the CSS file, where they will be largely invisible.

We as web designers are always seeking to increase our audience. There are sites that specialize in optimizing content so that search engines will find them and place them in a prominent position in their results pages. Rather than thinking of web accessibility as a chore to satisfy the ADA, we should see it as a way to make our work accessible to the largest and broadest possible audience. Who wouldn’t want that?

Update on April 6 2015: I ran http://www.kinohistory.com through Achecker. Very helpful advice. My site will be fully accessible shortly.

Good work on Mr. Key. Forgetting to check the RGB option always costs me at least five minutes each and every Photoshop session. The violet tint you added to the Key picture is striking. It would have been easy to simply fill the whole picture with a flat, even coating of violet, but it looks much better the way you did it, with the outer edges of the picture remaining white. Sort of like a vignette. I know some of the things we do are a purely academic exercise. The piercing blue eyes would probably not make your final cut, but you did a good job with them. As I found out while doing my exercise, it is much more difficult to colorize a vintage photograph, where features tend to blur into one another.

You did a great job restoring and colorizing the Capitol c. 1860. Nice strategy in cleaning up that crease. The sky would be pretty straightforward since you could grab “clean” sky and simply cover over the crease. As you pointed out, the lower half of the crease is more problematic and your solution of using the burn tool was a good one. A possible solution to the loss of imagery on the corners is to vignette your picture all the way around, perhaps using a cloud motif. It might be a cheat but at least it would remain true to the era’s style of presentation.

I can’t imagine using the lasso tool without a mouse! Your colorization looks great. I think when colorizing vintage photographs the trick is to avoid making them look like 21st Century digital photos. You have just the right mix of understated colors and grayscale to maintain the integrity of the original photograph. Finally, a nice job on the beveled lettering (this is something I have yet to master).

After many revisions, and a wrestling bout with navigation, here is the main page with links to each of the alterations I made to various film history images. Trial and error is a cruel teacher! 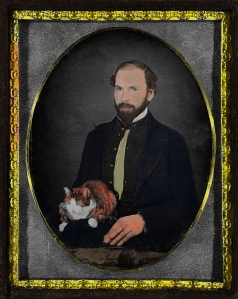 This weekend I worked on my 19th Century Union soldier with holding a cat. With the exception of the gold trim around the frame, I tried to keep my hues muted. I gained a real appreciation for the artists who do this regularly. I still think my skin tones look like they were painted on, but a real artist would be able to blend subtle shifts of color and shade to make the photo look like it was natural. Skin tone was real difficult, and I think I will avail myself of the website that has natural skin-tone samples. It was painstaking work (blessed be the history panel), but I think there are lots of opportunities to grow my photoshop skills if I keep working at it.

My Comments on Classmates’ Posts